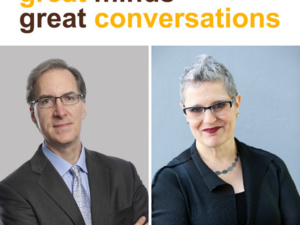 Great Minds, Great Conversations: Keeping Up With the Times

Please join us for a conversation with Steve Jones ’89, President and Chief Operating Officer of Skyview Networks, and Ellen Pollock, Editor, Business Day, The New York Times who will discuss pressing issues of today, the role of news reporters, and decisions CEOs are making when it comes to corporate social responsibility.

About the Speaker
Ellen Pollock, Business Day’s editor since April 2017, came to The Times from Bloomberg Businessweek, where she was the magazine’s editor—the first woman to hold the position at the magazine. Previously, she worked at The Wall Street Journal for 18 years as a reporter and editor. Articles she worked on as an editor at The Journal won Pulitzer Prizes in 2003 and 2005. She also authored The Pretender: How Martin Frankel Fooled the Financial World and Led the Feds on One of the Most Publicized Manhunts in History. Pollock is a graduate of Brandeis University and a great believer in the power of dark chocolate.

Moderator
Steve Jones earned a BA in Social Sciences from Adelphi in 1989. While an Adelphi student, he was hired as a DJ at WLIR/Long Island and became a part-time student as his on-air career took him to NYC, working as a writer, producer and programmer for ABC News Radio. Steve eventually achieved his Adelphi degree and went on to hold senior management positions at both the Walt Disney Internet Group and ABC News. He was a Fellow in Columbia University’s Executive Leadership Program in 2011 and has received many prestigious awards, including multiple Edward R. Murrow Awards, a Peabody Award, the Ward L. Quaal Leadership Award from the Broadcasters Foundation of America and the First Amendment Award from the Radio Television Digital News Association. In 2019, Steve joined Skyview Networks as its President & COO leading that company’s growth from 5,000 radio station business relationships to more than 9,000 station relationships as of 2021. Steve has been a mentor to Adelphi students and at Disney organized annual career events for graduating students. We’ve been fortunate to have Steve’s leadership on the President’s Advisory Council since 2018.