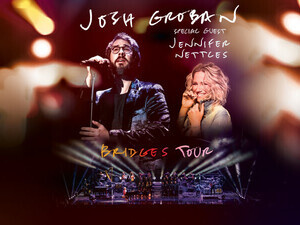 Josh Groban is an internationally renowned singer, songwriter, and actor whose baritone voice is instantly recognizable and unparalleled among his peers. He has entertained fans across the globe with his multiplatinum albums and DVDs (selling more than 30 million worldwide), electrifying live performances, and comedic film and television appearances. Groban is the only artist who has had two albums land on Billboards list of 20 best-sellers of the last 10 years. Don't miss Josh Groban on June 15.