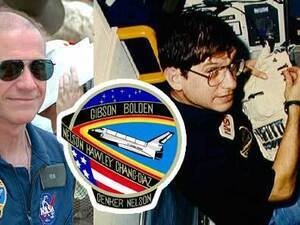 Join us for an evening with Space Shuttle Astronaut Robert J. Cenker

Robert Joseph "Bob" Cenker is an American aerospace and electrical engineer, aerospace systems consultant, and former astronaut. Cenker grew up in Pennsylvania and is a graduate of Penn State University with a BS in Aerospace Engineering. He continued his studies and received an MS degree from both Penn State and Rutgers University.

Cenker spent 18 years at RCA Astro=Electronics working on hardware design and systems design concerning satellite attitude control. He also worked on in-orbit operations as well as spacecraft assembly, test, and pre-launch operations. NASA came to RCA and offered them the opportunity to apply for a Payload Specialist seat on a mission launching the Satcom-K program. Cenker and another colleagues were selected and they trained with career astronauts and other Payload and Mission Specialists for Challenger mission STS-51L. In July 1985, he was selected for a flight on Columbia STS-61-C. The crew included Commander Hoot Gibson, Charlie Bolden (former NASA Administrator), Bill Nelson (former FL US Senator), George Nelson, Steven Hawley, Franklin Chang-Diaz and Cenker. The Columbia had several aborted launch attempts before a successful launch on January 12, 1986. The shuttle traveled over 2.5 million miles in 98 orbits over the six-day mission and logged over 146 hours in space.

The Challenger disaster was ten days after the Columbia returned and the shuttle program was grounded until 1988.

Cenker currently consults with various firms in the areas of spacecraft design, assembly and flight operation, and microgravity research.

This event is FREE, but reservations are required!

There will be an exclusive Museum Member Meet & Greet at 6:15! Please have your member number ready when calling.