Even though Roomful of Blues’ lineup has changed over the years, the band has always been one of the tightest, most joyful blues ensembles in the world. Their winning combination of jump, swing, blues, R&B and soul remains their calling card.

Roomful of Blues, according to DownBeat magazine, “are in a class by themselves.” With their masterful combination of jumping, horn-heavy, hard-edged blues and R&B, it’s no wonder why the great Count Basie called them “the hottest blues band I’ve ever heard.” Since 1967, the group’s deeply rooted blend of swing, rock ‘n’ roll, jump, blues and soul has earned it five Grammy Award nominations and a slew of other accolades, including seven Blues Music Awards (one for Blues Band Of The Year in 2005). The band has been led since 1996 by guitarist Chris Vachon. Guitar Player says, “Vachon burns with explosive solos and a delightfully greasy sense of rhythm.” Roomful of Blues has always maintained its signature sound by boasting great musicianship and a stellar horn section—featuring tenor and alto saxophonist Rich Lataille, who first joined the band in 1970. Lataille’s masterful playing can evoke either the fat-toned honking sax of the glory days of early rock or the cool elegance of big band swing jazz.

With a non-stop performance schedule for over 40 years, Roomful of Blues has earned critical, popular and radio success and a legion of fans around the globe.

Come early for dinner and then enjoy the show from the same table. 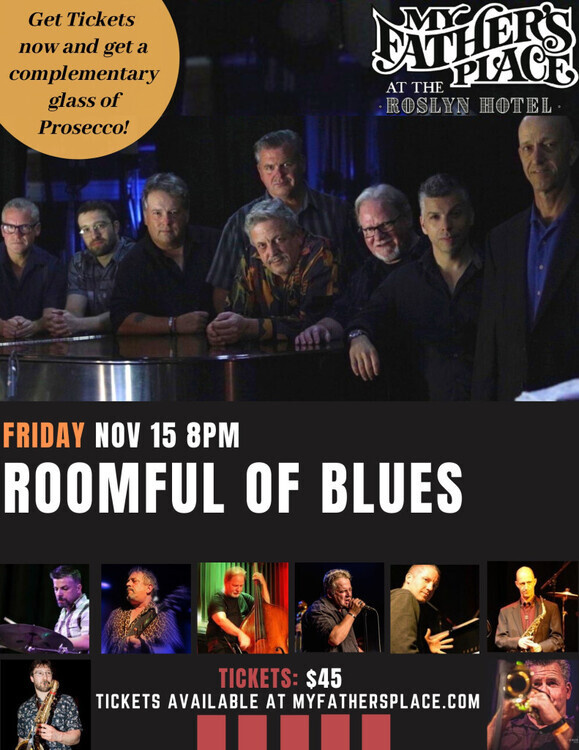