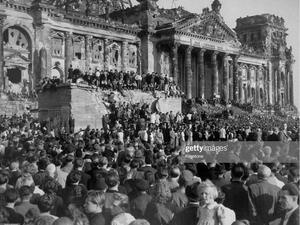 The Marshall Plan: Dawn of the Cold War with Author Benn Steil, DPhil

In the wake of World War II, US officials under new Secretary of State George C. Marshall set out to reconstruct western Europe as a bulwark against communist authoritarianism. Their massive, costly, and ambitious undertaking would confront Europeans and Americans alike with a vision at odds with their history and self-conceptions. Focusing on the critical years 1947 to 1949, Benn Steil’s account brings to life the seminal episodes marking the collapse of postwar US-Soviet relations—the Prague coup, the Berlin blockade, and the division of Germany. The Wall Street Journal called the book “brilliant” and the New York Times called it “trenchant and timely.” THE MARSHALL PLAN was the winner of the 2019 New-York Historical Society Barbara and David Zalaznick Book Prize in American History. Join us for a talk by the author. Co-Sponsored with the Rogers Memorial Library. Co-Sponsored with the Rogers Memorial Library.